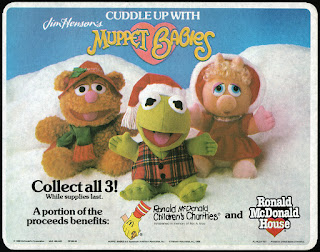 Many moons ago, McDonalds did a promotion for the Muppet Babies (who premiered in Muppets take Manhattan, then got the cartoon series, books, and comics!) Three of them were released. This was normal for fast food restaurants back in the day, especially for Hardees (The California Raisins, Disney, and Pound Puppies/ Purries) and McDonalds. We already took a look at restaurant and store Pound Puppies and now let us take a look at these,

But before the review, Lets watch the ad:
And yet another I found:
I currently own 2 of the three. 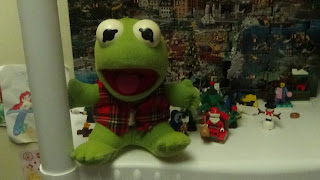 My Kermit is missing his hat and scarf but for 99 cents at Goodwill? Who cares! I first bought him just because he was a Kermit, but after finding Piggy I was like ok I am getting the collection now. He is just a simple plush but looks pretty cool and I am not so sure that baby Kermit translated well. I say this because he looks like a Kermit not so much the baby version, but this is actually one of my favorite Kermit;s in my collection! 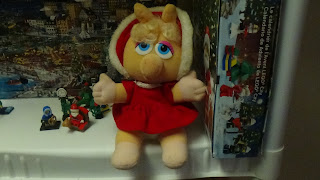 Piggy however translated perfectly! She looks like the baby version and is s cute. Her dress is pretty to.

I never owned these as a kid which is shocking since we always got the restaurant plush, but glad that I have them today, Before I go, how about that first appearance in the  movie?


Lastly is the rock video version from a talk show! So much 80's jokes plus a scene featuring Piggy and water that is taken from Flashdance.