Its a little late as I usually post this Monday morning, but it took me a long time to figure this list out!

Well it's that time of the week again Pop Culture League!
Here's This week's topic:

I decided to go in a few directions with this. So let's start shall we?
TOP TEN FAVORITE VINTAGE TOYLINES

10. GLO-FRIENDS/ MY LITTLE PONY
I linked these together because I grew up with My Little Pony n' Friends. I never had these series, but have many ponies now but yet have any Glo-Friends and want them. I consider this in the top ten due to tastes but also because  Pony is around to this day.
9.    JEM
Never had these as kid. I did watch the show regularly though. These dolls looked very much like their packaged images and cartoon counterparts.
8.   TMNT
How could I not? TMNT has been on shelves almost regularly since the 8s. I do believe their was a pause but it was not long. These figures were excellent and although they regularly jumped the shark (Wingnut) they somehow always made em work.
7.   M.U.S.C.LE.
These small pink and eventually other colors wrestlers were so simplistic but awesome. I got them regularly and loved them. Thanks to super 7 they have started making a comeback with properties like Alien, He-Man, and Street Fighter versions!
6.   GO-BOTS / TRANSFORMERS
I lumped these due to the similarity. Go-Bots (now owned by Hasbro) were excellent and were the toys people got when parents did not want to spend much! Ironically, they were just as entertaining and spun-off Rock Lords! Transformers were the ones to survive and exist today. Both lines are here because come on cars that become robots!
5.   THUNDERCATS
One of the greatest. The series and movie were great and the toys had excellent sculpts and were various sizes. These were so awesome.
4.   M.A.S.K.
Cars and other vehicles that turned into different forms. These figures were the same scale as Dino-Riders at 2 ish inches and were a new kind of figure with their gimmick.
3.   DINO-RIDERS
I loved this line. Small figures with a dinosaur.
2.   MASTERS OF THE UNIVERSE
Arguably the biggest line in history due to what it did. He-Man was the first toyline to become a cartoon after the law banning that was abolished. Also it had 5 inch figures that looked like a cross between Conan and Hulk Hogan and made it work.
1.   G. I. JOE
Although it originated way before the 80s as a 12  inch doll line, we mostly all think of Duke and company when we hear this line. These 3 3/4 figures were well articulated and were so well done back then that many "vintage" figures actually work well with "modern" figures.
TOP TEN FAVORITE STAR WARS "TALES"
10. The Phantom Menace
Nuff' said
9.   Ewoks: The Battle For Endor  &
8.   Caravan Of Courage :An Ewoks Adventure
Unlike most of the movies on this list I actually have to say that these two are tied. I remember liking them as a kid but its been so long that I don't remember them that I had to put them here.
7.   Revenge of the Sith
Good film but not as good as the others and hated Vader.
6.   Star Wars: A New Hope
I know I will get a lot of flak for this, but to be perfectly honest, I am not a huge fan of the original movie, but it definitely ranks higher than most of the prequels.
5.  Attack Of The Clones
I loved this film and lets be honest Padme was awesome in it, not to mention Yoda!
4.   Clone Wars
The only animated movie that was in theatres. This was ok, but so high on the list because it began a great series and introduced us to fan fav Asoka!
3.     Return of the Jedi
I loved Jabba, the Ewoks and the finale!
2.     The Empire Strikes Back
My favorite until last year! Most agree this was the all time best Star Wars film and how can you hate a film that introduced us to great bounty hunters like Boba and Bossk, froze Han, gave us Lando Calrissian, severed Luke's hand, introduced us to one of the most shocking revelations ever, tore 3p0 apart, and gave us planet Hoth?
1.     The Force Awakens
Yes this is my favorite. I think it is because we saw Han, Leia, and Luke again. We see what happened to them and get brought back into even more tear jerking moments. Han!

For this list I left out tv shows and pilots.
10.    DTV: Monster Hits: This was a movie like special based on the bumpers that aired in between programs on the Disney channel back then. The premise was basically hit songs from back then were the background of clips from Disney shorts and movies! This one used Halloween songs like Thriller. It's on Youtube and I watch some of it every year.
9.      The Flintstones meet Rockua and Frankenstone: This hour long special is pretty good and revolves around Fred and Barney meeting a duo of monsters. One thing that mad me giggle in every Flinstone series is even though he has met so many, Fred is always not believing Barney. LOL.
8.     For Better Or For Worst - The Good For Nothing: I had to put it here because as much as I hate to admit it, I have not seen it yet but hear its good so I put it on the list.
7.      The Halloween That Almost Wasn't: One of the only live action specials that are on this list. Who can't love Judd Hirsch as Dracula? Its even funnier because I know him from Dear John!
6.    The Last Halloween: One of the last Hanna Barbera projects I believe, is the other live action special on this list. Sadly, it was also the last Halloween special made during my kid era that I remember so clearly. Gotta love the aliens!
5.   Claymation Comedy of Horrors: I loved this series of specials so much. They regularly used the California Raisins as well. Though not one I watched regularly, I still have to admit that it is pretty good and do watch it occasionally to this day!
4.     Mad, Mad Monsters: I have yet to see this in its entirity but what I have seen I have loved. Though this Rankin Bass special could be considered a movie I decided to put ot here!
3.     Garfield's Halloween Adventure: Ok first thing is I was born in July 1978, Garfield came to newspapers in June 1978! Also this was not only one of the best Garfield specials, but one of the best Halloween specials as well!
2.       It's The Great Pumpkin Charlie Brown: To my knowledge unlike any others on this list, this special is still aired on network television to this day. It has such memorable quotes :"I got a rock!" and who doesn't hope Linus meets the Great Pumpkin every time they see it no matter how many times you watch it? I still hope the Great Pumpkin arrives somehow! :)
1.      Raggedy Anne and Andy: The Pumpkin wWho Couldn't Smile: It's been forever since I've seen this but I remember looking forward to this every year.

There are many more specials and toys that deserve mentioning like, I'm not going to do that, but I had only 10 spots. Like my take on this challenge then why not check out my fellow league members' posts?
You might have noticed that I slipped Star Wars in (thats due to Star Wars Week going on here at my blog): 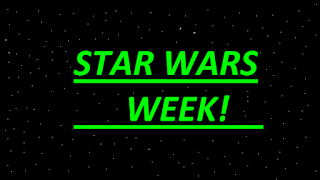 I added the Halloween specials due to it being so close to Halloween and because I am busy working on articles for my "31 Days of Halloween!" I decided to premiere the logo of that event now: 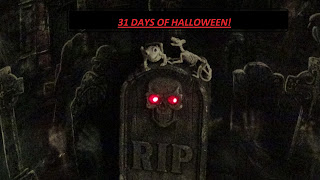 I hope you enjoyed my top tens this week and my fellow League member's posts as well.
The Pop Culture League