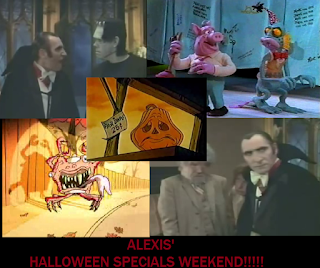 I was actually a little nervous about reviewing this classic special that first aired on CBS on October 31, 1979. Why? Because unlike the other ones that I announced this one I did watch as a kid and have great memories of. Cassie will tell you some things from our childhood are best left as memories and I was afraid this might be one of them. The way it opened, very confusingly as it showed scenes that we would soon see rather than a theme song, made me think I was right, Guess what? I was wrong! 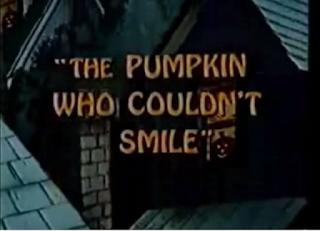 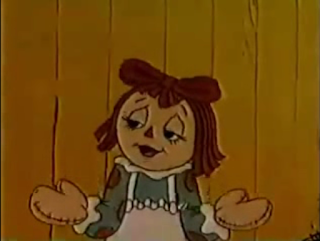 The plot is simple but sweet. Basically a kid named Ralph is sad because he cannot go trick or treating because of his mean old Aunt Agatha. She thinks that kids trick or treating are stealing and when Ralph asks for a pumpkin she says they cause fires and attract fruit flies. She also says go to bed (before 8PM) so that they can go to the museum in the morning. 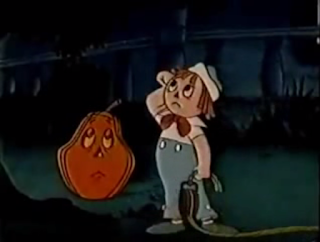 So Ann and Andy, with their dog Arthur search for a pumpkin for Ryan. Also while Andy thinks Agatha is eveil and mean, Ann believes that she just needs to be reminded of the joy of Halloween. 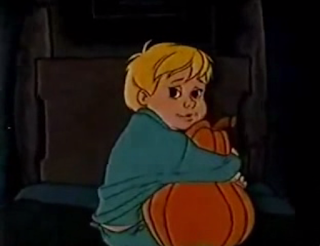 This special did get annoying at times like the depressed pumpkin but I think that they did that on purpose so that we would feel his pain. He is still unwanted on Halloween night and says "who wants a pumpkin after Halloween?" as he cries. 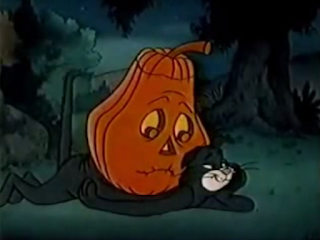 There are a lot of humorous scenes like when this cat gets ready to attack the mouse that left its hole because it was "Fed up" with the pumpkin's depression and is carried away by the pumpkin on an out of control skateboard. 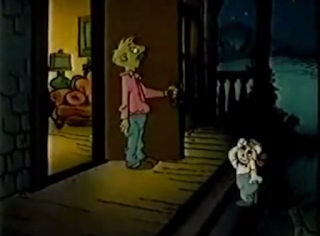 Or when Ann, Arthur, and Andy run after them and go into this man's house and he is like "nice costumes." 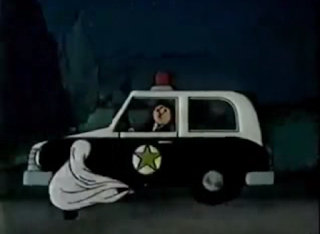 Or when the police officer calls in three ghosts on wheels, a jogger going 50 MPH, and a cat on a pumpkin on a skateboard and the dispatcher flat out asks him if his family has any mental health issues. 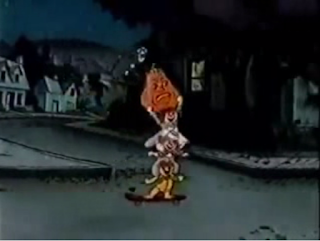 Overall I loved this special and it definitely is worth checking out again. I'd recommend it to anyone who likes old specials, Raggedy Ann or Any, or the voices of Daws Butler and June Foray. 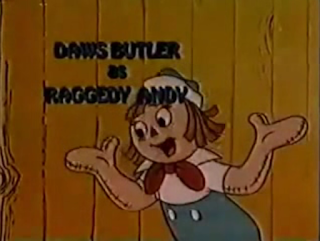 So who are they? I kept getting annoyed because Andy sounded so familiar, so I did a wiki search on both of them. First will be June Foray. She  has voiced people and characters that if your reading my blog you've heard of. She was the voice of many witches in cartoons such as Lonney Tunes' Witch Hazel, Disney's Witch Hazel (from my favorite Donald Duck short Trick or Treat), and the witch in the Tom And Jerry short "The Flying Sorceress." She is also the voice of Granny in the Tweety shorts, Mrs. Featherby in the Duck Tales movie, and both Natasha and Rocky in "Rocky and Bullwinkle!"

Daws Butler has a lot of recognizable characters such as Spike the dog (Tom and Jerry). He was also the voice of many famous and not so famous Hanna Barbera chaarcters until his death on May 18. 1988. These included Loopy De Loop, Hokey Wolf, Auggie Doggie, Huckleberry Hound, Quickdraw Mcgraw, Baba Looey, Peter Potamus, Snagglepuss, Wally Gator, Yogi Bear, Mr. Cogswell, and the reason I was recognizing him in the first place. His Andy voice is identical to his Elroy Jetson voice.

The writer of this special is also familiar to me as it was Chuck Jones. You all know his work. He was the uncredited layout artist on Disney's classic Sleeping Beauty, Animation consultant on "Who Framed Roger Rabbit", director on "How the Grinch Stole Christmas" animated special, and worked on many Looney Tunes classics such as "Transylvania 6-5000" and "To Beep or Not To Beep". As well as many Tom and Jerry shorts. It is cool that they all have Tom and Jerry in common.

Oh and Chuck Jones also directed the very first short that one of my three favorite Looney Tunes characters (the other two are Lola Bunny and Road Runner) appeared in!

So that's a look at "The Pumpkin Who Wouldn't Smile." Even more reviews all weekend long! 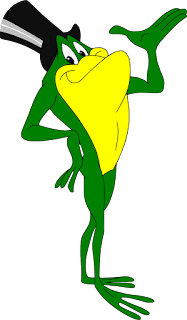